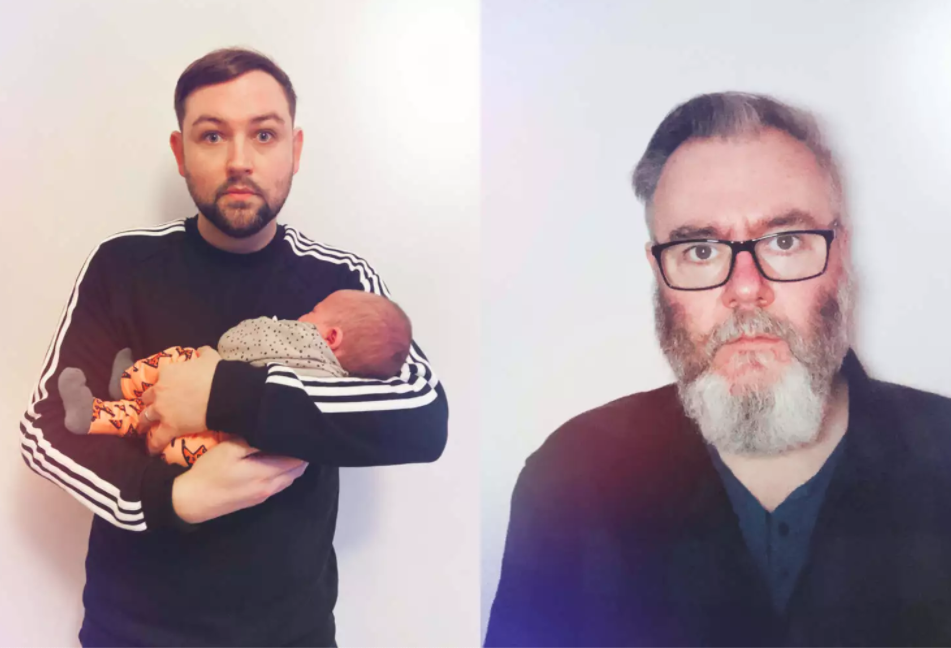 Arab Strap’s Aidan Moffat and James Graham out of The Twilight Sad’ have announced their debut album under the Gentle Sinners monicker – the now-confirmed partnership perhaps the worst-kept secret in Scottish indie music.

The ten track long-player, entitled ‘These Actions Cannot Be Undone’, will come out on 13th May, digitally and on CD, with a vinyl edition to follow in September via Rock Action – the label for which their bands both record.

Out now is a brand new track ‘Face To Fire (After Nyman)’, the follow-up to single ‘Killing This Time‘ from last November. James Graham says of the new song: “I wrote ‘Face to Fire’ the night Aidan sent over the music for it, I recorded it the next day. I had written down the words ‘fearlessly terrified’ on my phone a couple of days before.

“My anxiety had started to take over again,” he continued, “throughout my life I’ve been so scared of simple interactions with people yet I’m able to project my innermost feelings to the world on a regular basis.

“It doesn’t make sense to me. I’d been feeling physically ill for a few years, tired all the time and I had tried everything to feel better with no success.”

Moffat explains the band’s name: “‘Gentle sin’ is a wee phrase I’ve always liked. In the play it’s part of a flirtatious kiss, where the rules of etiquette are broken with a cheeky wink, sort of like a Shakespearean Sid James moment.

“But with a different kind of sinning in mind, I thought it really suited the songs we were making too, i.e. mistakes and disasters without pity or malice.”

Graham also explains how the partnership came about: “A couple of days before I left (from Glasgow to a new home in the North-East of Scotland, presumably closer to his beloved Aberdeen FC) Aidan and I met up and walked around Queens Park. I mentioned to him I wanted to do something outside of the band but had no idea on how to go about it.

“I wasn’t expecting him to suggest working together, I was just looking for some advice as I’ve loved everything he’s done in his solo career. Hearing what he’d done inside and outside of Arab Strap, I could see that they both complimented each other and helped him exercise different ways of writing.

“I wanted that. I wanted to try new things, I wanted to see what else was inside me. He suggested we work together and that he had some music he could send me. I said yes straight away.”

Moffat was similarly keen to take on a new challenge. “I really wanted to try something I’d never done before,” he explains, “which is make music for other people to sing to, and that sort of became a theme of the album”.

“If we hadn’t done it before, we should definitely do it now. So you can hear a lot more range in James’s voice than usual, for instance.” With the pair having – as Moffat puts it – “no idea whether or when we’d play live again, or when any of our other bands’ next plans could happen,” they immersed themselves in a process of writing remotely, sending music and vocal tracks back and forth, and coming up with a set of songs that form the forthcoming release.

“The subject matter was hard but writing it was easy,” Graham summarises. “Working with Aidan has been a dream. Most of these songs were written and recorded within days. It all just came very naturally and I never questioned the words or the feelings that came out of me.”

‘These Actions Cannot Be Undone’ tracklisting: