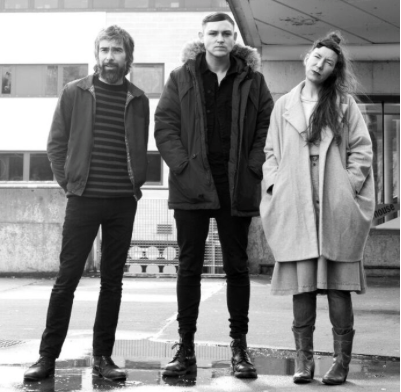 The release includes new single ‘There Is A Saved Place’ as well as the previous one ‘Buried Guns’.

The trio is a collaborative project between Kathryn Joseph, the singer-songwriter behind 2015 SAY Award-winning album ‘bones you have thrown me and blood I’ve spilled’; James Graham, frontman of The Twilight Sad; and Marcus Mackay; producer, percussionist, and founder of recording studio The Diving Bell Lounge.

The seven songs were originally written for a one-off performance as part of the Outskirts Festival at Platform in April 2016 – at the behest of Alun Woodward, former Delgado, who now programmes the Easterhouse arts venue.

Recorded at Mackay’s’ own Diving Bell Lounge studio, the album was mixed by Tony Doogan at Mogwai’s Castle of Doom and mastered at Abbey Road Studios by Frank Arkwright.

Continuing the ‘famous names’ theme, the artwork for ‘Conflats’ is an original piece by Scott Hutchinson of Frightened Rabbit.

The first live date in support of the album is on November 5th 2017 at Glasgow’s Oran Mor.

The album is available via iTunes and Spotify, or on CD from https://shop.rockactionrecords.co.uk/browse/rock-action-records/products/out-lines-conflats-cd (vinyl, seemingly, having already sold out).