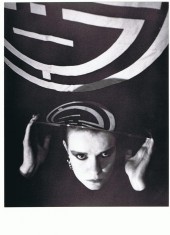 The album is available now via Boomkat.

A full (16 track) Vazz anthology is planned for later in the year including ‘Violent Silence’, the band’s 6-minute, Italian-language debut single. (If you’re wondering where you know the name from, said single was featured in one of the displays at the recent Harry Papadopoulos photography exhibition in Glasgow).

releases, this week's thing | Comment (0)
« Oxjam needs you!
Fight is on against Public Ents Licence »