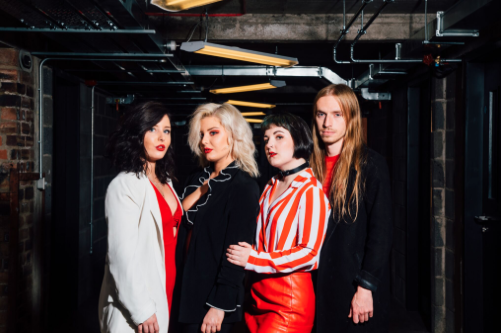 The band – twin sisters Hannah and Chloe Van Thompson, plus bassist Joanne Forbes and Shaun Hood on drums – have spent the past year supporting the likes of The Jesus & Mary Chain and Wolf Alice, and also reach the final 10 of Rebalance, a pioneering programme founded by Festival Republic and PRS Foundation.

This scheme saw the West of Scotland quartet, who formed in 2013, work with Margo Broom, who has previously produced the likes of Fat White Family and Goat Girl.

“The track itself is pretty fast and furious. It’s our first track released in over a year so I guess we wanted it to be a reminder that The Van T’s are back,” said singer Hannah.

“Suis-je cool?” In French means, ‘Am I cool?’ – it’s a song dedicated to those who feel they struggle to fit in, but should embrace everything about themselves,” she added.

Next show for the band is on Friday 7th December at MacArts, Galashiels.