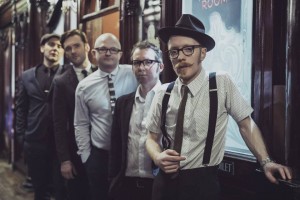 The 11-track long-player comes via Glasgow’s Holy Smokes Records, the label started by one Chris Blackmore effectively because hearing the band in a bar “blew him away”.

The Glasgow-based act are regulars on the city’s live circuit, but after self-releasing a single have been working in the rehearsal studio with George Miller, of legendary beat group The Kaisers.

The five-piece – Dave Addison (vocals/guitar), David Rae (mandolin/vocals), Richard Anderson (double bass/vocals), Duncan Kennedy (guitar/vocals) and Ross Wilson (drums) – formed in 2015, and include a host of Scottish music alumni including former members of The Bottleneckers, The Five Aces, The Hidden Masters, The Needles, Boogaloo Investigators, The MeatMen and The Guilded Angels.

The band were also the subject of a Jockrock ‘casual introduction‘ last year.