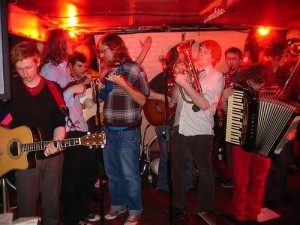 The Second Hand Marching Band launch a new album with shows in Edinburgh, Glasgow and London on the 17th to 19th of March.

The nine-track effort, entitled ‘Faults’, is a collaboration with Icelandic band Benni Hemm Hemm next month.

The SHMB’s mainmain Pete first met Benni from the Reykjavik act when on the same bill in 2007, and along with fellow Marching Banders Ross, Rich and Fraser started playing in Benni’s band.

Since then, nine songs have been produced in Edinburgh, Glasgow, Fife, Cumbernauld and Reykjavik, and have been compiled into a self-funded, DIY release, available as CD or download.