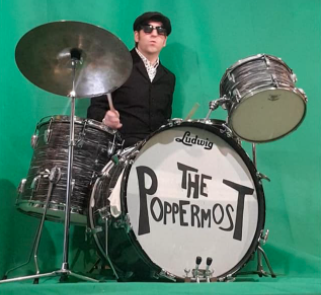 It follows a single ‘Can’t Take That Away’ from last November, the debut release by Joe Kane under this guise.

However, the Glasgow-based multi-instrumentalist has many entries in his back catalogue, including records by The Owsley Sunshine, Radiophonic Tuckshop, Ette and Dr. Cosmo’s Tape Lab. He has also worked with acts such as Neil Innes (Rutles/Monty Python), Joey Molland (Badfinger), BMX Bandits, Fast Camels, and The Martial Arts.

The latest six track EP is available on CD and at Bandcamp as well as streaming services, and precedes debut album ‘Hits To Spare’, due for release in June as a vinyl album as well as CD and download, via Think Like A Key Music.

The Poppermost’s lineup is as follows: Joe Kane on rhythm guitar/harmonica, Joe Kane – bass; Joe Kane: lead guitar, and (you’re getting the idea now), Joe Kane on the drums.