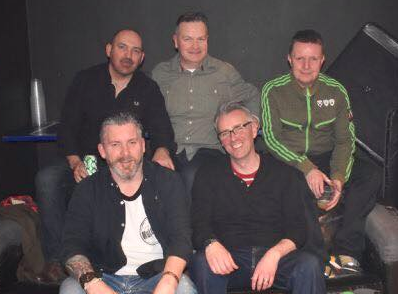 The Muldoons release their second single, ‘Don’t Be Like That, Girl’.

The track, which can be streamed via Spotify, is backed with a cover of the Echo and the Bunnymen classic ‘The Killing Moon’.

The quintet, originally from the council estates of Paisley, all have roots in Scotland’s indie music scene, including Greg Bolland whose first band, The Church Grims were a staple of the Scottish early 90s underground.

However, despite a few cassette releases, the band split in 1996, only to be persuaded to play a one-off gig at the Bungalow in their home town.

Their first single proper, ‘Lovely Things‘, eventually came in 2018, and the band have since played sell-out gigs at King Tuts, as well as at the O2 ABC and Paisley’s Indie Festival.

Jockrock says: “Despite a two-decade hiatus, it seems that The Muldoons’ wistful indie jangle hasn’t aged a bit – with a blend of raucous guitars and plaintive brass, it’s like they’ve never been away”.