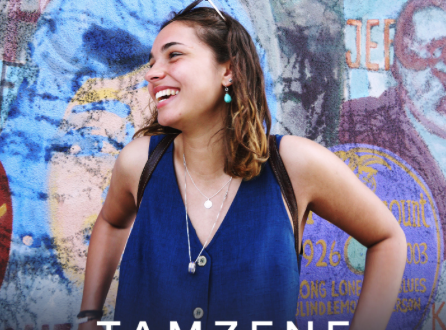 Tamzene releases a new single, ‘Accidentally Told You’ – written, recorded and produced at home during the lockdown.

It follows up single ‘You’re With Somebody Now’, released at the start of the year.

Originally spotted busking on the streets of Inverness by bookers from Scotland’s Belladrum Tartan Heart Festival, Tamzene has played at showcase events and festivals ranging from MUSEXPO in LA and Holland’s Eurosonic Festival to Live at Leeds, Latitude, and The Great Escape in the UK, as well as, closer to home, TRNSMT and of course Belladrum.

However, the break in continuous touring and travel has seen the multi-instrumentalist confined to home in the Highlands, and spending her time writing and recording at her home in the town of Cromarty during the COVID-19 pandemic

“This is a true isolation demo, written about a genuine slip-of-the-tongue,” she says of the new track. “I make lots of home demos, but this one felt special somehow, like this version is how it’s supposed to be and should be shared.

“Being forced to be back at home in the beautiful Highlands has been interesting for my creativity,” she continues. “I feel so lucky to be surrounded by nature and the sea, but it’s also difficult to let go of the weeks and months that were planned, and seeing the overwhelming impact of this pandemic on our Global Community has been nothing short of heartbreaking.

“Songwriting gives me an escape, and a constant way to express and release whatever I’m feeling which I’ve really leaned on. I have been re-connecting with close friends (with Zoom quizzes and FaceTime calls) and spending more time cooking for my Step-Dad, something I normally wouldn’t have the time for during my flying visits home. I also managed to dust off my violin for this particular song, rediscovering my love for the first instrument I learned how to play!”

‘Accidentally Told You’ can be heard via Deezer, Amazon, Apple Music, and Spotify.