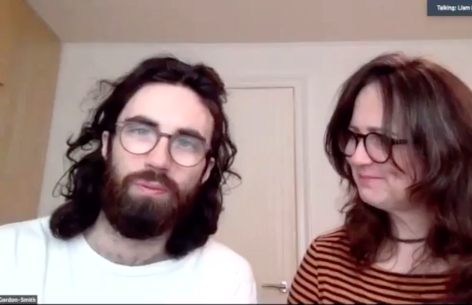 A musical mother and son have united to record a series of songs to raise funds for the creation of ‘The Contaminated Blood Tree’ – a tribute to be set up in Edinburgh in recognition of those infected and affected by the contaminated blood scandal.

The appeal was started in 2019 by actress and singer Julia Gordon-Smith (formerly Julia Dow) and musician/producer Iain Gordon-Smith – their connection to the cause stemming from their respective father/grandfather, Peter Gordon-Smith.

Peter, a well-respected Edinburgh jazz musician, died in July 2018 of liver cancer; a direct result of Hepatitis C which he contracted through contaminated blood products administered in the treatment of his haemophilia during the 1980s.

His daughter Julia has told of his final wish – that she should sing again after a 20-year hiatus – “Keep Singing, Keep Acting, Keep on Being You”.

Having also recently attended the Infected Blood Inquiry hearings in London, she decided to create this body of musical work in Peter’s honour, in aid of of Haemophilia Scotland and the Contaminated Blood Fund.

The contaminated blood scandal stems from thousands of NHS patients receiving contaminated clotting factor products in the 1970s and 1980s. It is believed that almost 4,000 haemophilia sufferers became infected with hepatitis C, with more than 1,000 if these becoming infected with HIV, leading to at least 1,246 confirmed deaths.

The duo have put together a six song set of covers with the first four already released, with the most recent being their take on ‘I Can’t Stand the Rain’, originally by Ann Peebles in 1973.

The tracks can be heard and purchased via linktr.ee/lovebloodandcovers, while donations can be made at the campaign’s MoneyGiving page.