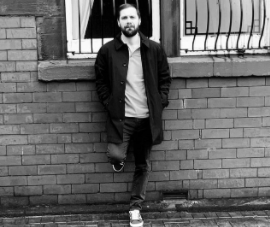 Available as a Bandcamp download, the track is the work of singer-songwriter Darren Roy.

The double-A-side release – backed with ‘Do You Wonder‘ – will be followed by with an eight song album to follow, in June.

The Fife-based musician works with brother Michael on recording his music in their home studio, on a Behringer UMC22, with both songs being mastered by Alex Wharton at Abbey Road Studios.