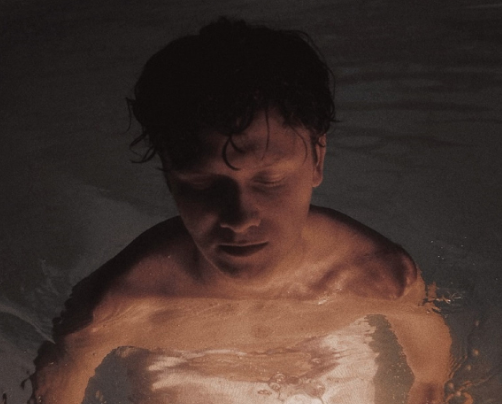 Jared Celosse and Chrissy Barnacle are the first of six artists to release vinyl on the Olive Grove label as part of their ‘Archipelago’ series.

Each artist contributes six songs to one side of the split 12″ EPs, which form a series of three 12″ slabs of vinyl, each with artwork by Kris Ferguson, which will form a vista when placed in the correct sequence.

The six tracks from Celosse include ‘New Orleans (Esca)’, the song which won him the inaugural Stewart Cruickshank Bursary for songwriting.

The 24-year-old songwriter, who grew up in Prague with Dutch and English parents, moved to Glasgow in 2014 to study music and philosophy.

Celosse was initially spotted by Carla J. Easton who directed him towards the Glasgow label Olive Grove Records, who in 2017 put out an EP of four songs he had recorded in his bedroom studio while still a teenager.

For the six tracks on the split single he worked with Stephen A Watkins, who was again on engineering and mixing duties, aided by M.J. Despres.

Also contributing to the EP are percussionists Steve Myers and Filip Squibb, plus strings by Marie Kobayashi, Nathan Son and Arisa Kobayashi. The recordings were made by
Steve Myers, Simon Fullarton and Sasha Bobchinetskaya.

Chrissy Barnacle’s half-dozen tunes are more of a one-woman effort, the Glaswegian songwriter’s session being produced by Lews Glass at Glassworks and mixed and mastered by Jonathan Huxtable.

Similar splits will be released later in the year – in October, volumes 3 and 4 by Pocket Knife and Moonsoup and in early 2020, Circle Meets Dot​ and Henry and Fleetwood will complete the series.

While the EPs are available as downloads, the vinyl set can be obtained from
olivegroverecords.com