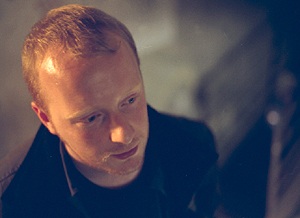 The third Human Don’t Be Angry album ‘Guitar Variations’ has been released, on the Around7Corners label.

The largely instrumental side project of former Arab Strap guitarist Malcolm Middleton, it follows up the singer-songwriter’s recent album under his own name, ‘Bananas’.

Middleton describes the nine-track effort, recorded at his own Dramatic Ironing Studios, as “Basically me messing around with guitars. Mostly”, although he also plays piano on the closing track, ‘Hotel’, as well as adding drums to several tunes – despite the album being mixed by producer and former Delgados percussionist Paul Savage, at Chem19 Studios.

The album is available on 180g heavyweight “black” vinyl in a black card discobag inside a deluxe clear PVC wallet, with the CD in a thick card wallet.

“F**k knows how digital files even work,” Middleton adds, the album being available to stream or download at Bandcamp, but not, for the time being, at Spotify or indeed anywhere else.

On the album itself, Middleton says: “It carries on directly from where Electric Blue (the second Human Don’t Be Angry full-length release from 2015) left off (which was about 10 miles up my own arse), and will probably land me the Nobel Prize For Early 21st Century Guitarrorism. If that’s a thing.

“Or at the least it will garnish (?) me with the respect I finally deserve as a guitar player from The Bog, Falkirk.”

Middleton plays the Great Western Festival in Glasgow on November 23rd – an afternoon show, before heading to Neu! Reekie! in Edinburgh for a ‘Dissection’ of Arab Strap’s sophomore album ‘Philophobia’, which is set for re-release on Chemikal Underground.