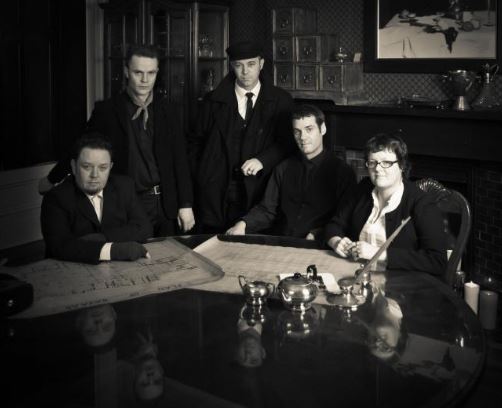 If you’re reading this at teatime on Monday, WHAT RE YOU THINKING? Irish troubadour Jack Lukeman is at Perth Theatre , and you’ll be able to catch him if you get your skates on.
Failing that, 6music faves Snapped Ankles will be bringing their shrubbery to Mono in Glasgow. Oh, and lock up your milkbottles, Midge Ure is at The Lemon Tree in Aberdeen.

Not much doing on Tuesday, but at Nice’n’Sleazy in Glasgow, Ayr trio Brothers.

On Wednesday, for four nights, 13 – 16 March, A New International have their collaboration with Vanishing Point Theatre, ‘The Dark Carnival’, running at Dundee Rep. It’s great, you should go. (a fuller review can be found here)

On Thursday, Neon Waltz head south to play The Tunnels in Aberdeen (yes, unusual we know but the quartet are from John O’Groats, so most places are south).
Also on Thursday, and we don’t say this lightly, Prestonpans’ finest, The Rah’s, venture through west to play McChuill’s in Glasgow

They then head north to The Cellar in Aberdeen for a show on Friday, while Primes play Conroy’s Basement in Dundee.
Neon Waltz make their way down the coast, to P.J. Molloy’s in Dunfermline and German synth pioneers Tangerine Dream are in Glasgow, at Barras Art and Design – ok, that seemed a bit unlikely but it’s true, apparently.

In Paisley, the SAMAs (Scottish Alternative music Wards) are doing a ‘takeover’ and C Duncan plays the Arts Centre as part of this.

The following night, same deal, same venue – Kathryn Joseph.
Also on Saturday, The Rah’s are in Inverness, at Mad Hatters, The Filthy Tongues are back on home ground, at Dreadnought Rock in Bathgate, ska machine Esperanza are at Troon Concert Hall, and former Husker Du / Sugar man Bob Mould plays Edinburgh’s Liquid Room
Also in Edinburgh, davesnewbike have a show at Brig Below.

In Glasgow, a bit of a nostalgia night with Stiff Little Fingers and Eddie and the Hot Rods at the Barrowland, while L-space and Last Night From Glasgow labelmates Foundlings have a show at Stereo. Or, if you’re going to Broadcast to see hotly-tipped combo Desperate Journalist, get there early to catch guests Miss The Occupier.

Finally, to Sunday – The Rah’s just about make it home from their travels, stopping off at Sneaky Pete’s in Edinburgh while at Dundee’s Beat Generator Live!, Kardo.