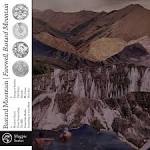 The nine tunes on the Song, By Toad 12″ / download were recorded in October 2012 by the six members – Meursault’s Pete Harvey & Neil Pennycook, Jill O’Sullivan out of Sparrow & the Workshop, Rob St. John (known as a member of eagleowl & Meursault), Broken Records‘ Rory Sutherland, and Reuben Taylor, keyboardist from James Yorkston & the Athletes.

The album is technically just one long track, learned by the musicians over the space of a couple of hours and recorded mostly live – but consisting of three songs written by each of Jill, Neil and Rob.

The release follows (in a sense) the ‘Cold Seeds’ album on the same label, which featured Animal Magic Tricks, King Creosote and Meursault on a similar collaborative release.

The album launches in London at the Shhh! Festival on Sautrday 24th May, before a hometown gig at Edinburgh’s Queen’s Hall, on Thursday 29th.