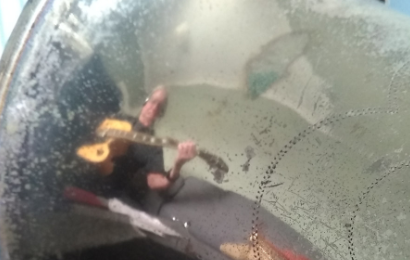 The Leith-based songwriter has used lockdown and the time usually spent on busking and traveling to write songs, resulting in a total of four releases in 2020, most recently his ‘Xmas Noir‘, preceded in August by ‘One Way System‘.

In total he has released more than 20 tracks in 2020, following his sole (but 19-track) release in 2019, album ‘Thoughts of Leith‘. MacDougall also made an appearance on the Lost Cafe Sessions compilation album, as part of his former band of the 1990s, Blue On Shock.

He describes the latest as “a concept single, or alternatively a CP” – its three parts – ‘Giants’, ‘Scotch Wine and Beer’, and ‘Three Bridges’ – forming one continuous play track.

The song is also in 3/4 time signature and its March 3rd release date backs up the theme – “it’s easier to listen to than to talk about” he adds.

As per usual with MacDougall’s releases the track is free (“not 3”), to download.

More on Clivey Macdougall can be found at Soundclick.