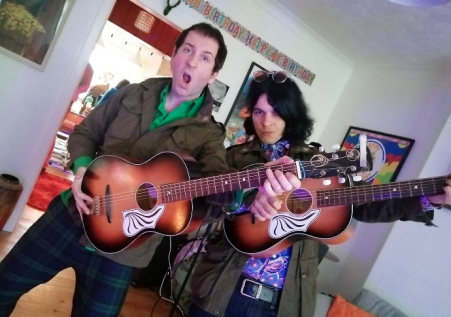 The duo consist of two Glasgow-based songwriter/producers – Joe Kane and Marco Rea. The project – initially designed “to keep themselves sane during lockdown” – is growing into a series of songs and videos.

The first of these includes contributions from friends and collaborators including former Trembling Bells frontwoman Lavinia Blackwall, who is like the duo, and fellow backing vocalists Lindsay Humphreys and Kirkcaldy McKenzie, based in Glasgow. However, other contributions have also come from around the globe – drummer Joe Montague and backing vocalist Clark Gilmour are in England, Frédéric Fugen supplies Hammond organ from his home in France, along with cellist Delphine Franck; horn player Gordon “Wilf” Wyper is based in Sweden, there’s slide guitar from Brazil in the shape of Danilo Fiani, and former Uncle John and Whitelock keyboard player Nic Denholm has sent in backing vocals from Los Angeles.

Joe Kane assembled and mixed the 122 (!) tracks as well as writing and producing the song along with Marco Rea.

All proceeds from the sale of the single on Bandcamp (on a pay-what-you-like basis) will be donated to the NHS COVID19 appeal.