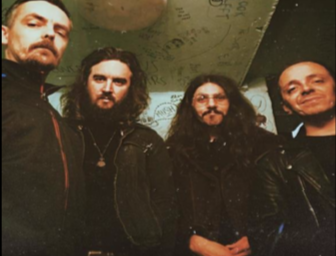 The Glasgow-based four-piece recently signed with U.S indie label Mint 400 Records, whose first output from the band is a remastered version the six tracks written by Garry Thomson and David Mcilwraith, both of whom play guitar and share vocal duties on the recordings.

The EP was produced by bassist Tony Brennan Jnr.; the quartet’s lineup being completed by completed by Alex Abate on drums and percussion.

The psych-garage foursome – who also go under the monikers Jimi Jung Jr, Smokey Barosso, Arfur Rabbits, and The Spider (not necessarily in that order) – formed in 2015, since when they have opened for the likes of The Fall, Acid Mothers Temple, Night Beats and Matt Hollywood & The Bad Feelings.