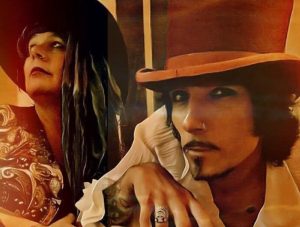 DIY and prog aren’t musical genres usually mentioned in the same breath.
However, Glasgow-based trio Army of Moths have created a complex long-player with a lush, multi-tracked sound which has all the hallmarks of an elaborate and expensive recording facility.
However, there’s a strong punk spirit running through the band’s spirit and songs – if not their quality of recording, as they explain…

JP and I are both from Glasgow. Debz is originally from Lytham St Annes but is probably just as much Glaswegian as the pair of us.

The idea of ARMY of MOTHS came about in January 2018. Originally as a way of getting away with going off in a wee world of our own and making whatever noises that came into our heads. The idea to start compiling our racket as an album probably started around the summer of this year, although none of us actually want to take full responsibility for suggesting that.

We’re not the sharpest knives in the cutlery drawer when it comes to technology, so we did everything on an old 12 track at home. It’s a really lovely, organic process. Write, record, mix it live from the 12 track, apologise to the neighbours then upload it.
I’m still too thick to use software and I don’t even own a laptop, so it’s all just a DIY approach to doing things. The fun part is trying to make something that sounds like whatever is going on in our heads, with limited resources and not really knowing how to do it.
Our lovely friend Stevie Cossar made it shinier with something he calls mastering, which is essentially electric sorcery and then we put it out ourselves.

A barrage of noises, all bundled together like a black plastic bag full of broken pop music, thrown in the boot of a Ford Cortina and driven into a river of psychedelia, only to resurface with a head full of punk angst.

We’re music fans and as such, get so much life, inspiration, emotion and feeling from the bands we all love. We wanted to do something that passed on that feeling. We wanted to do something that people would actually ‘feel’ as well as hear.
The idea of making someone feel good, happy, different, sad, sane, insane and maybe even simultaneously, should be a gift….and one we wanted to attempt to give.
It’s always love innit.

‘Sorry To Disturb You’ is out now. More at www.armyofmoths.com