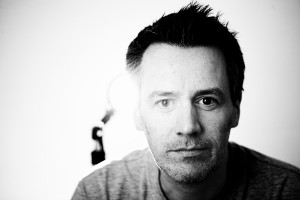 Andrew Howie releases an album, ‘Solo Guitar Loops 1’, which, its creator says, “pretty much does what it says on the tin – in a pretty/weird/ambient/dark kind of way”.

The ten track release from the artist formerly known as Calamateur is available as a limited white-cased cassette as well as a digital download, and follows up three conventional albums, which were, Howie suggests, recorded, re-recorded, mixed and remixed “to within an inch of their life”.

This latest album, conceived in the space of around four weeks last spring, is the result of recording every piece of improvised electric guitar for several hours a week – employing Anne Lamott’s “shitty first drafts” approach

The new 44-minute album is made up of Howie’s favourite loops recorded over that period – some of the tracks improvised on-the-fly in one take, others from multiple takes. But corrections and re-recordings are, we’re told, kept to a minimum – in the words of Lamott, “Perfectionism is the voice of the oppressor, the enemy of the people.”

releases, this week's thing | Comment (0)
« Permahorn
How To Swim »