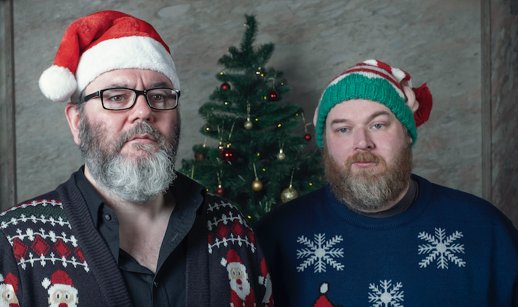 The 10 track release, which follows the duo’s debut collaborative release ‘Here Lies The Body’, contains eight new original compositions and two festive covers in Mud’s ‘Lonely This Christmas’, and Yazoo’s ‘Only You’, which was a Christmas number 1 for The Flying Pickets.

The album started with a plan for a one-off song, the single and near-title track ‘A Ghost Story For Christmas’, but quickly expanded into an EP.

“Then, on a nice, sunny, summer morning, I phoned Hubby and suggested we just do a whole album,” says Moffat.

“We were really enjoying it – there’s something pleasantly perverse about recording Christmas songs in summer clothes – so we just kept going.”

The process then saw Moffat adapting a classic Hans Christian Andersen fairytale and an essay by Charles Dickens, while Hubbert taught himself to play piano via Youtube videos.

The album is available at shop.rockactionrecords.co.uk.