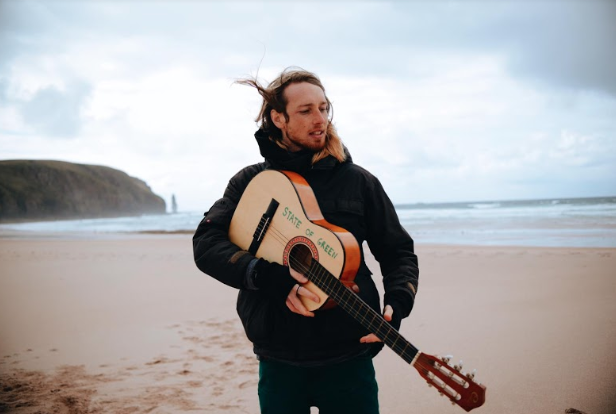 Singer-songwriter Samuel James-Griffiths is launching his new project State of Green with a tour with a difference – playing mini-gigs in some of of Scotland’s best-loved outdoor attractions.

The musician has spent the last few years touring around Germany and Austria under the moniker Inkfields, promoting his Creative Scotland-funded album ‘Beneath the Waves’.

The current tour has already begun, but has been party to Scotland’s unpredictable weather – the tour kicked off on Saturday with a set at Smoo Cave followed by dates on Sandwood Bay, Old Man of Storr in Skye and Glen Coe, but a set at the set at the summit of Ben Nevis had to be cancelled due to poor weather conditions.

However, the weather looks better for sets at The Kelpies on Thursday and the tour is rounded off on Arthur’s Seat at the rescheduled time of Saturday evening.

James-Griffiths has something of a reputation for unusual concerts, including performances on a bus in Freiburg, at Strasbourg Marathon, at the house of a top politician in Stuttgart, 1600m up an Austrian mountain in the snow for skiers, one in the German equivalent of Homebase, and an ‘animal flashmob’ in Karlsruhe centre inGermany.

State of Green will officially launch at an as yet unannounced show in Edinburgh on June 1st, after which work will begin on recording a debut single in Windmill Lane Recording studio, Ireland later that month.

James-Griffiths said of the tour: “There have been a lot of negative things going on in the UK recently and I wanted to counter that a little bit by bringing some unexpected free art and fun in some unusual locations.

“I’ve always been a fan of the amazing scenery in Scotland and I thought to myself ‘why not travel out to some of Scotland’s best known landmarks and play for the people there?’. I hope in doing so, I’ll be able to give some people an unforgettable experience.”

Although there are no State of Green recordings available at present, there is Inkfields’ ‘A Crowd Of Dreams’, which was part of the Fly By Night EP released earlier this year.