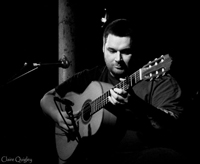 The SAY Award – the Scottish Album of The Year – is now compiling a very long album list (as opposed to its 20-strong ‘longlist’) of releases of long-players in the year 2013.
This is all part of the plan to find a successor to RM Hubbert’s 13 Lost and Found, the release deemed top Scottish musical effort of 2012.

As before, there’ll be a £20,000 prize for the winning album as well as nine runners-up prizes of £1,000 (plus an Art Commission valued at £20,000. From the comprehensive of (hopefully) very release from Scotland over the past 12 months, a longlist of 20 albums will be announced in April, before being whittled down to a ten-album shortlist, from which the winner will be selected at a glittering ceremony in June.

Musicians (or, we suppose, friends of musicians who are better with computers and stuff) are being invited to submit eligible releases for consideration for the award – this can be done directly on the SAY’s Add Album page. The likes of Biffy Clyro, Franz Ferdinand, Travis, Adam Stafford, Conquring Animal Sound and Homework have already had their minions enter their 2013 releases, as has RM Hubbert, hoping to win again with Breaks & Bone.