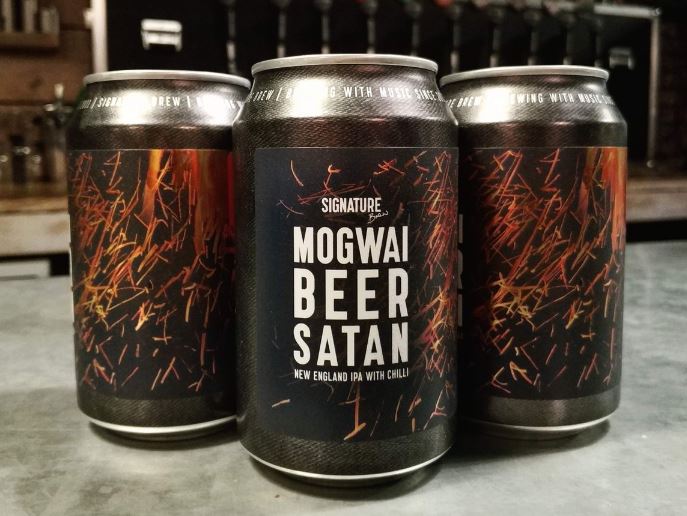 Mogwai have teamed up with Signature Brew to launch their own beer.

‘Mogwai Beer Satan’ is a limited-edition 5.2% ABV New England pale ale, which, its manufacturers say, is a “tropical, hazy IPA… low in bitterness… and carries huge, hoppy flavours and aromas of mango, pineapple and white grape.”

Naming the beverage after one of the band’s iconic tracks isn’t just an easy pun either. No, the company’s first concept beer is built around the properties of the tune, which initially appeared on 1997 debut ‘Young Team’. As they point out: “At a towering 16 minutes long the track sounds vast and complex, but strip it away and you’ll find just two chords at its heart.

“To mirror this, the beer employs simple ingredients which blend to make a flavour bigger than the sum of their parts… with a fittingly long finish.”

A “full cross-sensory, audio and taste experience” can be had at the beer’s launch – it’s this Thursday (November 15th), but unfortunately in that London – at the Signature Brew Taproom & Venue.

The event will double up as a launch event for the soundtrack to new Dennis Quaid / James Franco film ‘KIN’, for which the band provide the soundtrack. Stuart Braithwaite will be DJing, and even pulling a few pints, presumably for early arrivals, the first 45 of whom will also get a 12″ x 12″ Mogwai alternative KIN soundtrack art print.