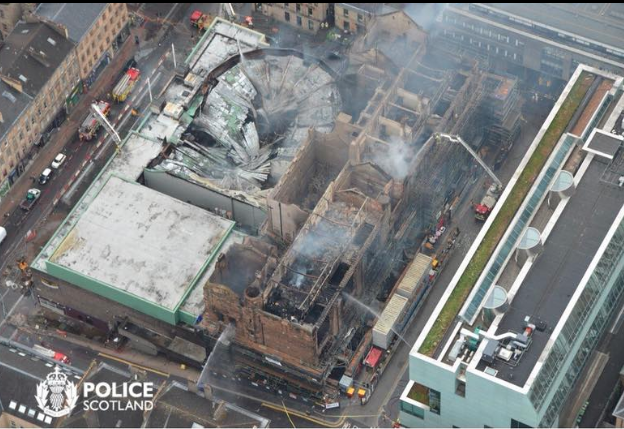 A massive fire has devastated Glasgow School of Art – just four years after parts of the building were destroyed by a smaller blaze.

The Grade A listed Mackintosh building was close to having its restoration work completed after the 2014 fire.

The latest blaze seems to have begun sometime after 11pm on Friday night, before spreading to the O2 ABC.

More than 120 firefighters tried to combat the inferno using 20 appliances, but it appears that the building has been gutted, with the roof and walls on the upper floors being destroyed.

Neighbouring buildings were evacuated, though there have been no reports of casualties.

According to the BBC, deputy chief fire officer Iain Bushell said: “The roof is gone completely. We cannot get in yet to assess the damage. I can only see from the street but it looks as if the building has been extensively damaged.”

He added: “It’s a tragedy that such an important building to the people of Glasgow has been damaged again.”

With the O2 ABC also seriously damaged, the gig by Glasgow indie act Patersani has been canceled, while a show by US legends Belly has been moved to The Garage. The venue was evacuated as club night Propoganda was taking place.